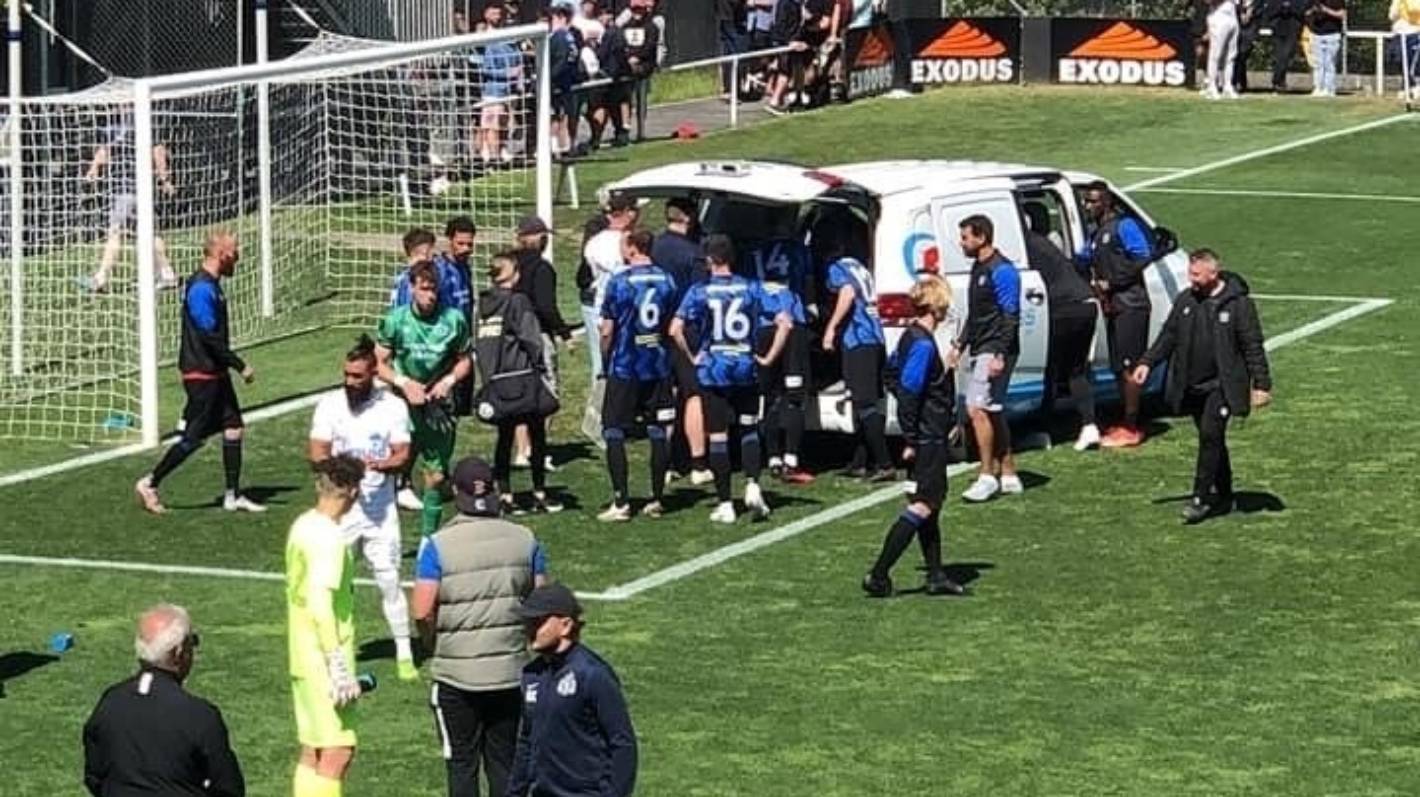 Wellington Free Ambulance has confirmed a patient with a broken leg was taken to hospital in a courier van after paramedics had still not arrived 38 minutes after 111 was called.

Miramar Rangers on Twitter confirmed football player Jorge Akers suffered a “serious injury” during a match against Wellington Olympic at Dave Farrington Park. Witnesses there have confirmed that he was taken to Wellington Hospital by courier van after an ambulance took so long to arrive.

Some blamed protesters blocking the ambulance though this has not been confirmed and Wellington Free Ambulance said there was nothing to suggest that was the case in its files.

Wellington Free spokeswoman Rachel Wilson confirmed there was a 38-minute wait until bystanders gave up on an ambulance and took the player to hospital themselves. The 38 minute-plus wait was not seen as a delay “from our perspective”, she said.

The 111 call about an injured player at the Miramar park was placed at 2.45pm on Saturday.

Thirty minutes later, at 3.15pm, the ambulance clinical desk called the scene back to do an over-the-phone triage.

Then, 38 minutes after the initial call, at 3.23pm, the ambulance was called off by those at the scene who decided to take the player to hospital themselves. Photos show the patient was taken in the back of the courier van instead.

Wilson said the injuries had been deemed as non-life-threatening meaning the ambulance was meant to get to the scene as “urgently as it could” given the current workload.

She could not say how busy the ambulance service was on Saturday but said sunny Saturday afternoons were generally busy.

Wellington Free Ambulance on Saturday told Stuff that the person had been taken to hospital by ambulance. Wilson on Sunday said that information was incorrect.

Wellington Olympic strength and conditioning coach James Mac Aodhagain​ called 111 and said the dispatcher told him they were finding it hard because of traffic caused by the “anti-vax” protesters. But there could have been other factors slowing traffic in the city on Saturday, Mac Aodhagain said.

Akers clearly had a broken fibula – a lower leg bone – and was expected to be off playing for six to nine months as a result, he said.

Both teams crowded around Akers to give him privacy from the television cameras and the crowd of about 1000. It was a “long wait” but he praised Wellington Free.

” I would encourage people to support Wellington Free ambulance – they need as much support as they can get, even at the best of times,” he said.

Spectator Glenn Kirby on Saturday said it was announced over the speakers at the football game that the ambulance had not been able to leave the hospital due to protesters.

The injury happened in the goalmouth, and it was immediately clear it was a serious leg or ankle injury.