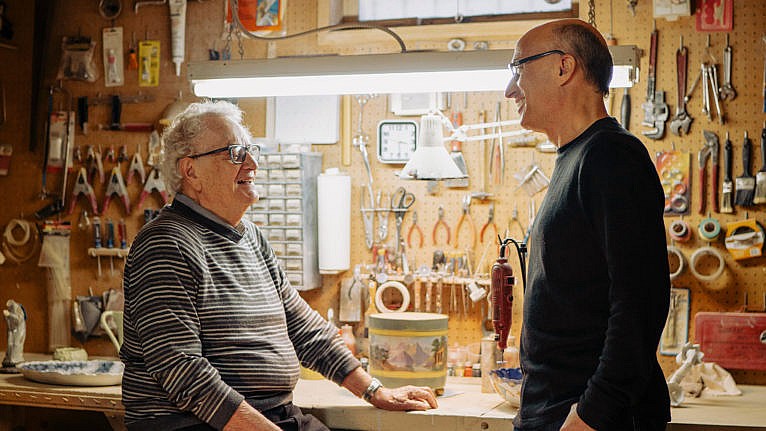 Julius Morry, writes his son Jeffrey, taught him that the only meaning of possessions is the one we ascribe to them

Julius Morry (left) with his son, Jeff, in his longtime basement workshop. (Photograph by Skye Spence)

“Can you tell where it was broken?” This was a common refrain from you throughout my childhood. In 1970, when I was nine, you left your job as a hospital administrator in Winnipeg with plans for our family to relocate to Los Angeles. But the Byzantine paperwork and looming bills for a family of six made you realize that staying in Canada and turning a hobby into a job made the most sense. Plus, there was the concern about me and my brother possibly being drafted. So, with a specially built workshop in our basement, you embarked on what became a 50-years-and-counting career in artwork restoration.

Though you inherited your talents from your artistic Russian mother, who had a hobby repairing damaged pieces for friends, you took it to a hallowed level. I understood the degree of your skill by how often my grandmother ordained you (in Yiddish) as having goldene hent, golden hands.

You could not have picked a better time to start your business. It was a period when collecting decorative arts such as figurines, carvings, china, dolls and glassware, many being antiques, was very popular. On a regular basis, you would call me down to your workshop, present a piece you had repaired and ask if I could tell where it had been broken.

RELATED: A physician to his mom: ‘The stress of life under the virus fell disproportionately onto you’

My childhood and teenage years were filled with customers appearing at our doorstep with a mesmerizing array of pieces from around the world. Most were smashed beyond recognition. Insurance and moving companies, auction houses, art stores and galleries, personal collectors and museums kept you buzzing with work. I soon came to know exotic names like Lalique, Lladró, Waterford, Swarovski, Hummel, Wedgwood and the Royals—Doulton, Albert and Worcester.

Your workshop was like a private art gallery with regularly rotating pieces. The shelves were packed with everything from tapestries to paintings to pocket watches to stuffed animals. And so many crucifixes. It struck me only when I was older how interesting it was that my Jewish father restored probably hundreds of crucifixes over the decades.

I would occasionally scurry down to see what wondrous new pieces had arrived. You would be sitting at your workbench surrounded by walls teeming with perfectly organized tools and tricks of the trade. Though you delivered the work with your hands, I knew it was your eyes, heart and intellect that mapped the process.

MORE: 35 years later, a student writes: ‘It’s because of you that I because a teacher’

There was one category of pieces that had the greatest impact on me. Inuit soapstone sculptures and whalebone carvings were a common sight in the workshop. As I matured, I found myself increasingly drawn to these works of art, which I felt gave me powerful insight into the essence of the North.

The one-time customers resonated the most. Sometimes I would quickly peek from the kitchen to the front door or catch pained whispers through my bedroom door. I could hear the pleas for a stay of execution made to you as judge in the court of last resort. There were the older women clutching treasured dolls of their childhood. Or the frantic teens begging you to repair a piece damaged during a forbidden house party. Or people, many of them immigrants, with the remains of broken family heirlooms. Many of these items had little monetary worth. But they were priceless in their emotional value, bonds to past loved ones, inviolable connections to family memories and their legacy for future generations. Your wizardry perfectly restored all, often creating missing parts from thin air. I never tired of seeing the tears of joy of those customers. For some, you plucked back their youth from old age.

Your career opened up my young mind to the world and taught me that people, not things, are the real treasures: the only meaning of possessions is the one we ascribe to them.

READ: Dear Grandma: ‘When I think of true selflessness, I imagine you’

As for your continual questions to me about where a piece had been broken, I could never tell.

This essay appears in print in the December 2021 issue of Maclean’s magazine with the headline, “Dear Dad.” Subscribe to the monthly print magazine here.

The piece is part of Maclean’s Before You Go series, which collects unique, heartfelt letters from Canadians taking the time to say “Thanks, I love you” to special people in their lives—because we shouldn’t have to wait until it’s too late to tell our loved ones how we really feel. Read more essays here. If you would like to see your own letters or reflections published, send us an email here. For more details about submitting your own, click here.