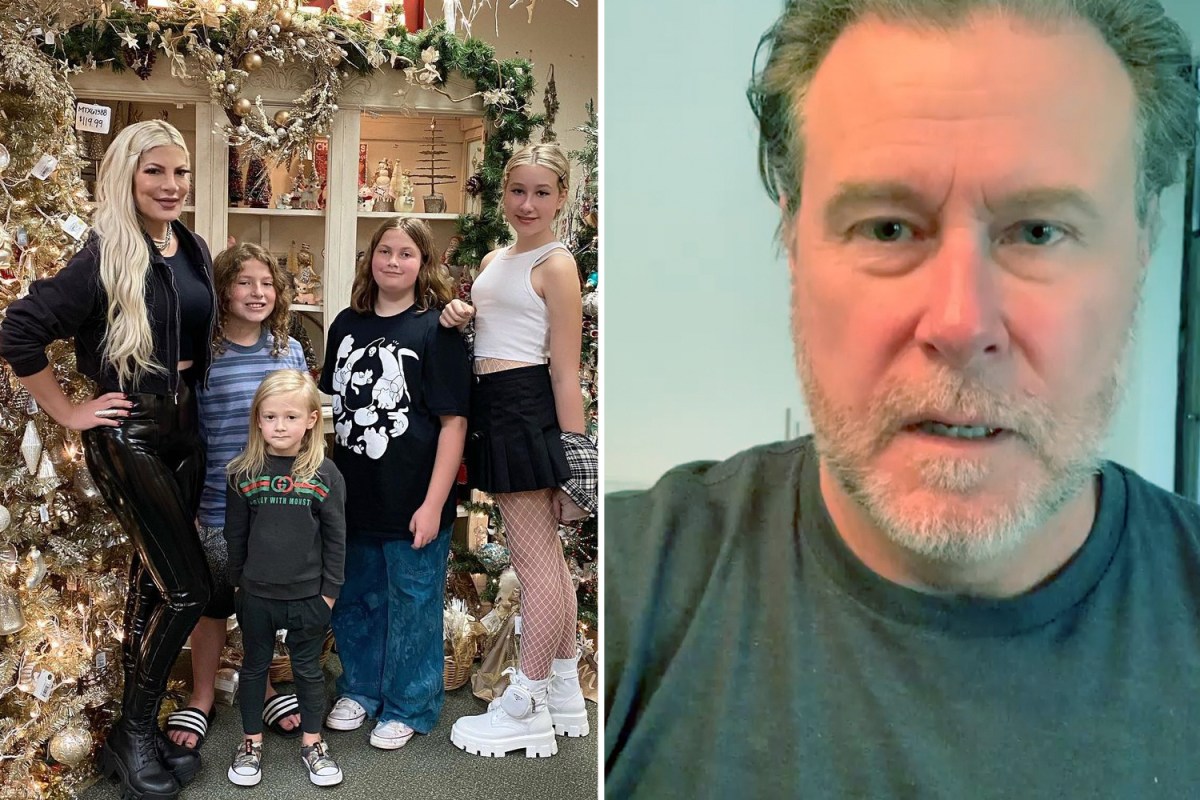 TORI Spelling has excluded her husband Dean McDermott from another festive family outing as she posed with her four kids amid her reported “plans for divorce.”

Tori, 48, celebrated an early Christmas in her Instagram photo.

They stood under a large mistletoe and a bright sign that said: “Believe,” in big letters.

The Beverly Hills, 90210 actress wished for the festive season to be around “365 days a year.”

Liam, 14, was missing from the group photo but the family still had the “best time” together.

The Scary Movie 2 actress had gotten “so many beautiful vintage and modern decor pieces for the holidays” from the “family-owned business.”

Tori captioned the post: “A MUST if you are in LA. And, they sell online too. This is in no way shape or form an ad. Just a huge new fan!

This is not the first time Tori and the kids were pictured without their father, Dean, 55.

Just in time for Halloween, Tori and the kids celebrated the spooky season with Pennywise the Dancing Clown on Instagram.

In the snapshot, the Scream 2 actress held hands with Pennywise while standing in front of the Mr. Floats truck.

Tori mentioned that they “bumped into Mr. Floats while parking.”

She wrote: “Georgie was there too. IT was a spooky good time. We want to play your game”

Back in October, Tori was spotted while she was leaving a meeting with her lawyer.

She appeared to be having an intense phone conversation.

She was photographed holding a notepad that had these specific words: “custody, support, and assets” written on it.

In a recent Instagram video, Dean showed off the birthday gifts he had received from his kids, especially the present from his daughter Hattie.

Dean pulled out two canvases with artwork inspired by horror movies and mentioned Hattie, who happened to be a horror movie fan.

He said: “It is my 55th birthday today and I am starting to open presents. Got one here from Hattie Cat for dad, and it says ‘For dad. I love you so much. You are so kind. You are so loving and I am so happy to be your kid. You are the best dad I could ask for.”

He opened up his birthday card, which was signed by all his kids, and read aloud: “We love you so much. We couldn’t have dreamed of a more amazing dad. Happy 55th – the crossed it out – 25th birthday. We love you old man.”

Dean continued: “Needless to say, my kids have a sense of humor.”

He received golf balls, golf ball-shaped ice cubes, a club headcover, and a towel that read: “I use this towel to wash my balls.”

He did not share whether or not he had gotten a gift from his wife, who was also not mentioned in the video.