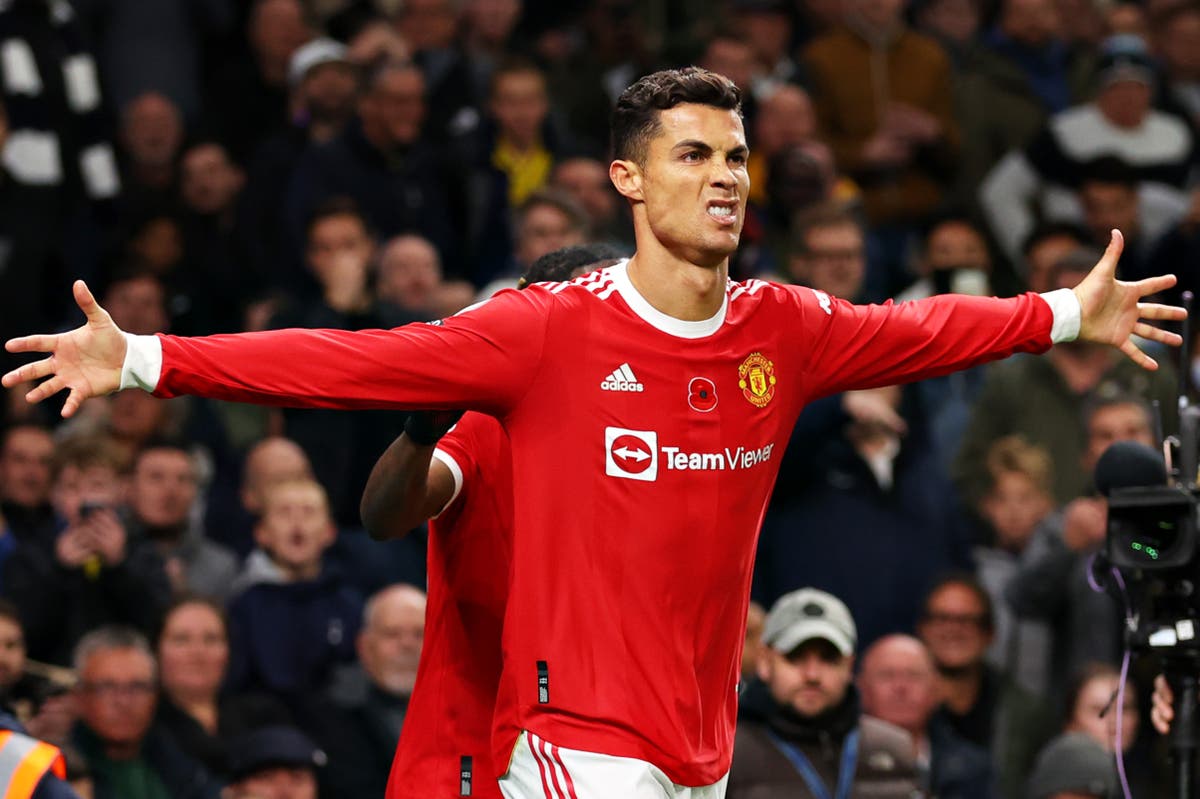 The six-time Ballon d’Or winner produced a timely influential display in a pivotal 3-0 victory in north London for his hugely under-pressure manager, who desperately needed a result amid intense speculation over his future following last weekend’s 5-0 home humiliation by rivals Liverpool.

Ronaldo provided a brilliant goal of his own as well as a stylish assist for Edinson Cavani, with substitute Marcus Rashford also netting to offer Solskjaer some much-needed respite.

While he is by no means out of the woods yet, it is Spurs counterpart Nuno who will now be feeling the heat after a desperate display from his goal-shy side and a mutinous evening at the Tottenham Hotspur Stadium in which fans registered their displeasure at his leadership, booing the team off the pitch.

The respective managers’ team selections – Solskjaer going three at the back and Nuno drafting in Ben Davies and Giovani Lo Celso – had rather suggested there would be a cautious start to proceedings.

However, there was an exciting tempo from the off as Heung-min Son’s early shot was deflected behind by Fred.

Cavani flicked a header well wide of the far post before being teed up by the impressive Aaron Wan-Bissaka, with the Uruguayan’s snap shot blocked by Eric Dier.

Muted United penalty appeals were waved away as Fred fell under pressure from Lo Celso, while Tottenham were also denied a spot-kick as Davies’ cross cannoned into the elbow of Wan-Bissaka, whose arm was tight to his body.

Tottenham should have then gone ahead when Lo Celso fired a disappointing free-kick into the wall but the hosts kept the ball alive and Lucas Moura’s smart lofted pass to the front post was taken down brilliantly by Son before he fired over from close range.

Cavani sent another header wide and Spurs thought they had taken the lead when Cristian Romero escaped the attentions of his fellow South American at the back post and kneed in after Dier had flicked on a corner from the right, but the offside flag was rightly – and belatedly – raised as the defender wheeled away in celebration.

Hugo Lloris was at full stretch to tip Fred’s ambitious effort wide and Tottenham’s frustration was compounded with a goal made in Portugal as Fernandes’ inch-perfect ball over the head of Davies was volleyed expertly back across Lloris and into the far corner from a tough angle by Ronaldo.

Spurs’ attempts to hit back before the break were in vain as Lo Celso shot over and Davies headed wide from a corner with Romero better placed.

United were quickly back on the attack in the second period, but David de Gea was left breathing a sigh of relief as Son curled a shot wide after his poor clearance had gone straight to Lucas.

Ronaldo was then celebrating what he thought was his second goal as his emphatic finish left Lloris rooted to the spot after brilliant work from Scott McTominay, but the offside flag was again correctly raised.

Lo Celso badly botched a promising Spurs counter and the home fans’ frustration with Nuno was made crystal clear as widespread boos and chants of ‘you don’t know what you’re doing’ greeted his decision to replace Lucas with Steven Bergwijn 10 minutes after half-time.

Tottenham were applying a fair amount of pressure but were desperately short on quality and composure, with Harry Maguire making a sliding intervention after good link-up play involving Emerson Royal, Lo Celso and Pierre-Emile Hojbjerg.

Oliver Skipp was inexplicably caught in possession by Fernandes and Ronaldo took over, beating Skipp with a Cruyff turn and then playing a terrific pass for strike partner Cavani, who coolly dinked over Lloris to make it 2-0.

Rashford came off the bench to complete a comfortable win for United, with two more crucial games ahead of Solskjaer, away to Atalanta in the Champions League before City visit Old Trafford for the Manchester derby next Saturday.

United now sit fifth – behind West Ham on goal difference only – and just three points adrift of third-placed City after the reigning champions were stunned at home by Crystal Palace.

Tottenham are two points further back in eighth and host Vitesse Arnhem in the Europa Conference League next before a trip to Everton.