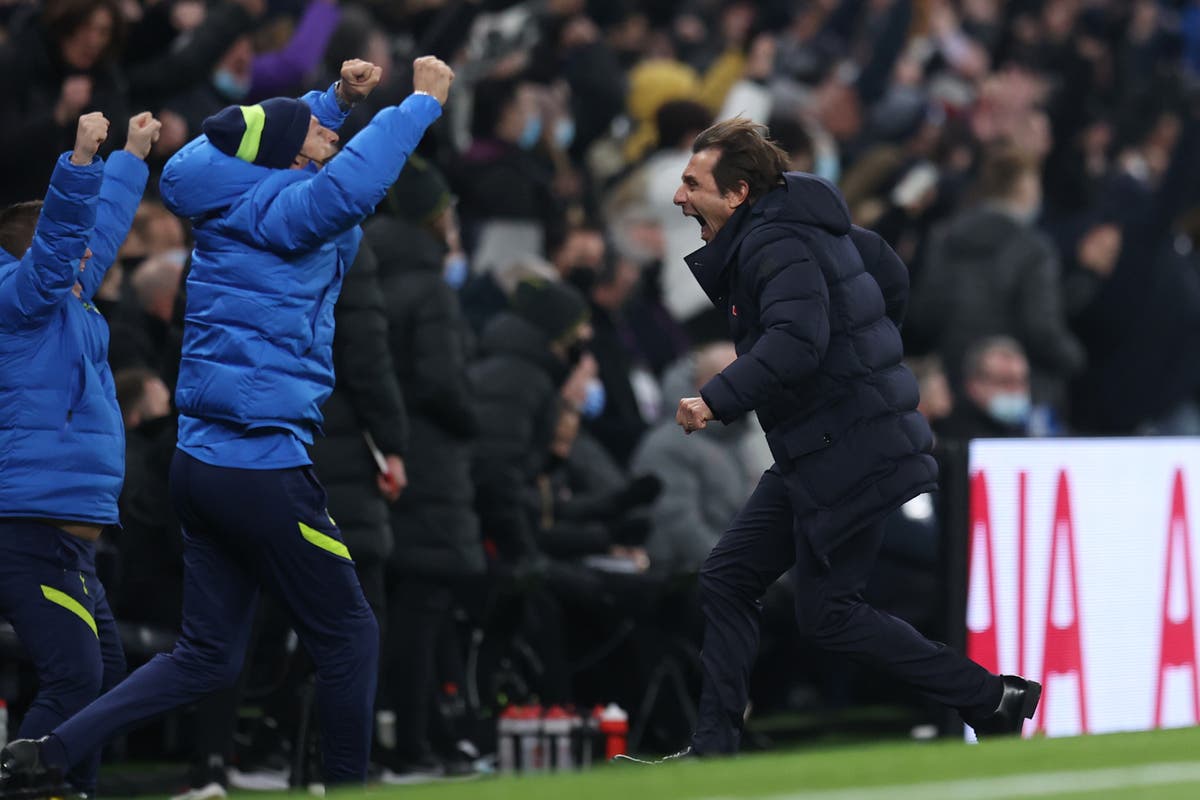 ottenham fell just short of a first statement win under Antonio Conte but they put in a landmark performance in a 2-2 draw with Liverpool, further underling their progress under the Italian.

Spurs were left to rue a host of missed chances after Harry Kane had opened the scoring with his first home goal of the season and also following Diogo Jota’s equaliser, but should nonetheless take enormous encouragement from a point against a Liverpool side who had won their previous seven games on the bounce.

Their display was particularly impressive in the circumstances, coming after an enforced two-week break during which their training ground was briefly closed and nine of Conte’s squad were forced into isolation with Covid-19.

A few weeks ago, Liverpool were streets ahead of Spurs but it was a measure of the hosts’ performance that they were disappointed with a point.

Despite Conte having to tweak his formation and personnel, Spurs frequently cut through Liverpool with ease, as the partnership between Kane and Son came alive again.

Kane fired Spurs ahead from Tanguy Ndombele’s brilliant pass – but it was their only clinical moment.

Dele Alli, Son and Kane were all culpable of big misses, the former forcing a brilliant save from Alisson, Son running into the goalkeeper after escaping behind and Kane nodding over from close range.

Spurs, though, must have created as many chances in one game as they did in Nuno Espirito Santo’s entire reign, while defensively they were assured, with Eric Dier impressing with his range of passing and Ben Davies helping to keep Mohamed Salah down.

Still, at 1-0 and 1-1, it felt grimly inevitable that Spurs would be made to pay for their profligacy and sure enough, Robertson headed home from close range from Trent Alexander-Arnold’s cross.

The goal stood, despite the ball striking Salah’s hand in the build up – one of the many controversies which punctuated the match.

You wondered if Spurs would have the reserves or mentality to hit back, but within minutes Son rolled into an empty net after a howler from Alisson.

This is not the first time that Spurs have looked back on missed chances against Liverpool, of course.

Last season at Anfield, they counted the cost of painful misses from Kane and Steven Bergwijn as a 2-1 defeat sparked their slide down the table under Jose Mourinho.

The difference this time, though, was that this performance really felt like the start of something big, whereas that game was, in hindsight, the beginning of the end for Mourinho.

Conte stuck to the same group of players in his first four League games but the Covid outbreak forced a rethink, and he described Liverpool’s visit as a “big chance” for his fringe players to prove they have a future at the club.

The performances of Dele, Harry Winks and Ryan Sessegnon were therefore particularly encouraging, as they began to change perceptions with eye-catching displays.

Dele fluffed his biggest moments but has not looked this menacing against a good opponent since perhaps the first few weeks of Mourinho’s tenure.

He was full of those trademark bursts into the box, constantly causing Liverpool problems in the final third, while doing his bit defensively.

Winks looked confident again. He was both combative at the base of midfield, winning the ball with a sliding tackle in the build-up to Kane’s goal, and positive in possession, setting up Son’s equaliser with one of several well-timed passes in behind Liverpool’s defence.

Sessegnon, making his first League start since January 2020, also did well at left wing-back against Salah and Alexander-Arnold, and occasionally forced the right-back onto the back foot. Even Ndombele did his bit with a fine assist, even if he was largely a passenger.

For Dele, Winks and Ndombele, consistency is key but Conte is clearly improving them, suggesting they have a Spurs future. Their resurgence would create genuine competition for places in the squad.

The switch to midfield three could be the future and is great news for all three, particularly as Son and Kane looked so lethal as a front two.