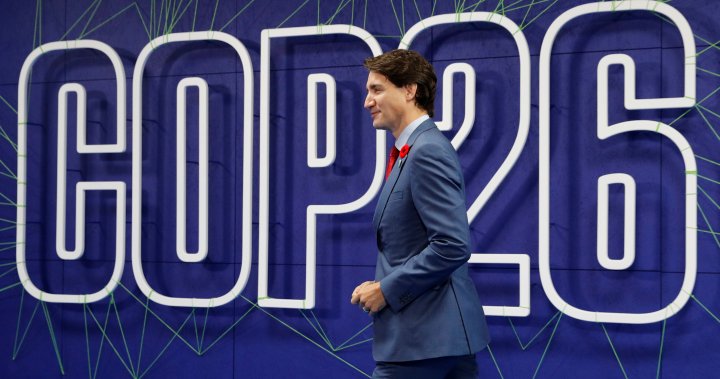 Prime Minister Justin Trudeau is in Scotland for the 26th meeting of the UN‘s climate group.

It’s the first time he will be at a COP meeting since the Paris agreement was signed just weeks after he first became prime minister in 2015.

Leaders’ summits are only held at every fifth meeting and the Glasgow negotiations are a year delayed because of COVID-19.

Canada’s emissions have risen more than three per cent since 2016, the most of any G7 nation, but Trudeau has substantially upped the ante in his climate plan over the last 12 months.

That includes promising to end the sale of gas-powered cars and create an emissions-free power grid, both by 2035, as well as capping emissions from oil and gas and then forcing them downward, by no later than 2025.

The COP 26 meeting comes on the heels of a G20 summit in Rome that Trudeau characterized as a partial victory.

“There’s no question that Canada and a number of other countries would have liked stronger language and stronger commitments on the fight against climate change than others,” Trudeau said at his closing news conference.

“But we did make significant progress on recognizing 1.5 degrees is the ambition we need to share.”

The leaders’ final communique saw them agree for the first time in writing that limiting global warming to 1.5 C would be better for everyone, but did not offer specific timelines for hitting net zero carbon emissions and eliminating coal power.