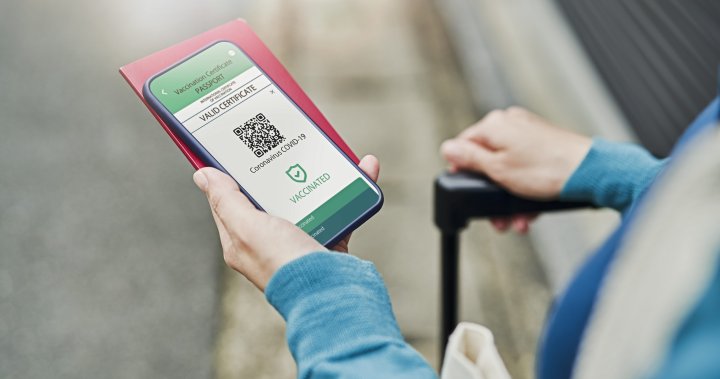 The vaccine passport will show your name, date of birth, and COVID-19 vaccine history — including which doses you got, and when you got them.

“I’m happy to confirm that all provinces and territories have confirmed that they will be moving forward with a standardized national proof of vaccination,” Trudeau said, speaking to reporters.

He added that Saskatchewan, Ontario, Québec, Nova Scotia, Newfoundland and Labrador and all three territories have put this national standard into use.

“You can download it into your phone, you can print it out, you can ask for a copy by mail if you don’t have those capacities, but you are now able to show proofs of vaccination immediately in all those provinces, and all other provinces have agreed and are working hard to come online,” he said.

The vaccine passport will have a common look and feel across the country, according to officials, including a “Canada” wordmark in the top corner.

Canadians will be able to use the proof of vaccination system both within Canada and for international travel, the officials said.

Officials said the proof of vaccination system also complies with the SMART Health Card standard, which uses technology that will allow officials to verify and authenticate the information without giving access to any other health or identity information.

The system is also supposed to be tamper-proof, the officials added, as it detects any changes to the document after it has been issued.

BREAKING: Here’s a first look at a federal, standardized vaccine passport, which is already published on the government’s website.

The website says that in every province or territory, page one will look like the Yukon sample shown below. pic.twitter.com/4kRJ5zMBqY