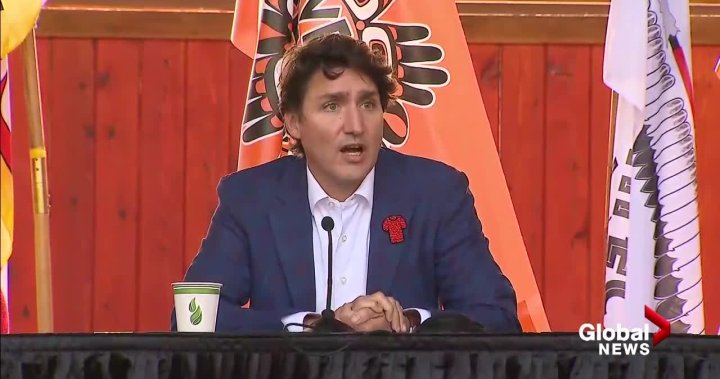 Comments by Prime Minister Justin Trudeau indicating the federal government has sent all records on residential schools to the National Centre for Truth and Reconciliation are “not accurate,” according to a statement from the centre.

“All the records in possession of the federal government have already been turned over to the National Centre for Truth and Reconciliation in Winnipeg,” Trudeau said Monday in response to a journalist’s question.

“We will continue to look to make sure that there are no others that we have remaining to turn over, but we have, in our understanding, turned over all of those records.”

Trudeau said full or partial attendance records for the Kamloops Indian Residential School dating back to the 1800s were among the documents sent to the centre. Earlier this year, 215 unmarked burial sites were discovered at the former school site.

“All of those are being held by the National Centre for Truth and Reconciliation as the central repository for all those records.”

In a statement issued Tuesday, the centre said Trudeau’s statement “is not accurate.”

5:14
How can PM Trudeau begin to make amends for mistakes in Kamloops?

How can PM Trudeau begin to make amends for mistakes in Kamloops?

“At present, we are still waiting for Canada to provide the final versions of school narratives and supporting documents used in the Independent Assessment Process to the NCTR. The NCTR has various school narratives on its website, but some are out of date. For other schools, no narrative has ever been provided to the NCTR.

“Additionally missing are various Library and Archives Canada quality records and records from provincial governments, most of whom have not yet produced vital statistics, including death certificates for children lost at schools or coroners’ reports.”

Residential school survivors and their families have been waiting for these records to be released since 2015 when negotiations were sparked by the Truth and Reconciliation Commission.

“At present, we are also still unable to access Indian Hospital records, federal health records, and day school records,” the centre said. “All of these records are crucial, not only to support missing children research, but to fully and truthfully document the residential school system, the children who died in the schools, and the ongoing legacy.”

2:01
Trudeau makes another promise to Indigenous communities ahead of throne speech

Trudeau makes another promise to Indigenous communities ahead of throne speech

The statement went on to say the full disclosure of documents should be viewed as a chance for the government to “build partnership” and show a commitment to reconciliation.

“If the prime minister is telling all Canadians and Indigenous peoples that the NCTR holds all records, it is time for that to be true.”

The Prime Minister’s Office passed on a request for comment to the federal Crown-Indigenous Relations department, which was yet to respond.

Trudeau visited the Tk’emlúps te Secwe̓pemc in Kamloops on Monday, after skipping an invitation to its healing ceremonies on the first National Day for Truth and Reconciliation on Sept. 30 for a family vacation in Tofino, B.C.

He apologized repeatedly for that mistake and vowed that Ottawa is truly “ready to partner” on reconciliation.

— With files from Elizabeth McSheffrey

The Indian Residential Schools Crisis Line (1-866-925-4419) is available 24 hours a day for anyone experiencing pain or distress as a result of their residential school experience.