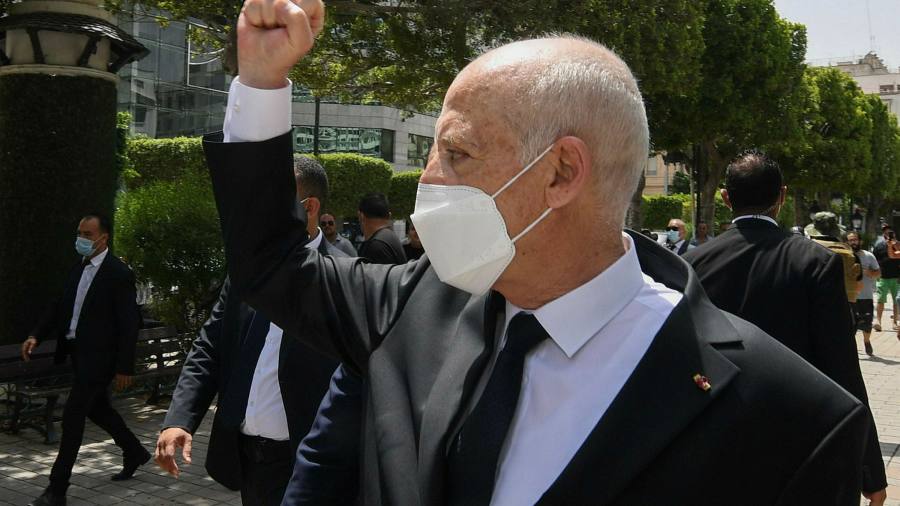 Tunisia’s populist president has tightened his grip on power by extending his suspension of parliament, widely seen as a sign that the country’s democracy is in crisis.

The move was announced in a brief statement on President Kais Saied’s Facebook page on Monday night, a month after he seized sweeping powers, dismissed the government and launched a wide-ranging anti-corruption crackdown.

The statement offered no indication of his plans, or reassurances that the country would return to the constitutional path. It only said the president would address the nation in the coming days.

Until Saied’s unexpected intervention last month, Tunisia was seen as the only example of a successful democratic transition among Arab countries that rose up against dictatorship in 2011.

Saied sacked the government on July 25 and announced that the assembly would be suspended for 30 days and its members stripped of their parliamentary immunity — actions decried by the country’s main political parties as a coup against the constitution.

“I think the extension definitely means we are not going back to the path of parliamentary democracy and there is no alternative being offered, not even early elections,” said a Tunis-based political analyst. “Tunisia is sliding back to its authoritarian past. The president and a small team of military and security officials have become the only decision makers in the country.”

Islamists and secular political parties had reached a compromise in 2013 allowing the country to draft a new constitution and hold a series of elections. But a succession of weak coalition governments since 2011 failed to address worsening economic problems.

As living standards plummeted, perceptions of corruption increased and parliament became more chaotic and fractious, many Tunisians lost faith in the system. Public opinion has welcomed Saied’s seizure of powers, viewing him as a saviour who would clean up the system and improve the lives of ordinary people.

Saied’s landslide victory in the 2019 presidential election was seen by analysts as an indictment of the Tunisian elite. A former law professor, he was a political outsider, a declared critic of the parliamentary system and an independent with no backing from political parties.

A month after his power grab, it remained unclear how he wanted to change the political system. He has rebuffed those who have called for political dialogue on the future and has refrained from appointing a prime minister, despite the country’s festering economic problems.

For now, Saied is at the height of his popularity, analysts noted, inhibiting any show of defiance from political parties, including Nahda, the moderate Islamist party and biggest force in parliament, with a quarter of the seats.

Current and previous members of the assembly have been informally blocked from travel and some politicians and senior officials have been placed under house arrest.

“I think a lot of political actors are playing a wait-and-see game in the hope of advancing their own agenda, but others are frightened of retaliation if they kick a hornet’s nest by criticising Saied directly,” said Marks.

Some Tunisians worried that Saied’s failure to appoint a government would only aggravate an already perilous economic situation. Talks with the IMF about a loan have been stalled for months. The economy, hit by the impact of coronavirus, contracted 8.8 per cent last year and economists fear the country will not be able to meet its debt repayment obligations.

Saied has asked traders to reduce prices, but offered no indications of how he will manage the economy.

“People have given Saied all the powers now, thinking this will help the situation improve,” said the political scientist. “For now, they don’t see that they gained by democracy, but in six months when the economy does not improve and they find it difficult to demonstrate against the regime, we will see people get angry at him.”